Ok, a long quote is coming! In my youth (and to some extent even now) I identify with this bit. My school wasn't as class-conscious as Orwell's St. Cyprian, but it was a small rural Lutheran 'free' school (as opposed to a state-run school). There was the Lord's Prayer at the morning assembly, and the feeling that while they couldn't make us wear short pants year-round, they could make us feel those whitish-blue legs deep in our souls.
There was an almost constant appeal to tradition, and an unwillingness to acknowledge that some things did not work. That some things needed to be met head-on and not hidden away. The world was a done deal, and your place in it was decided.

A Spanish short film from 1972. It is a creepy and absurd piece and probably an allegory as well.

Awesome game session the other night! Our fearless heroes (Spectre, Doc Shocks and Monolith) went toe-to-toe with a many-limbed, napalm-spitting kaiju on a collision course with scenic Canvey Island!
As if that wasn't enough, the dastardly Leprechaun and his cohorts appeared on a rainbow and began messing up an already messed-up situation. Add to that panicking locals and cider-fuelled alpha males running interference, and you're up the creek without a paddle.

Monolith slugged it out with the kaiju, was slugged out, crashed with a helicopter and wound up jumping from an exploding oil tanker into the waiting mouth of the monster!

Spectre encountered more civilian knuckleheads than you can shake a stick at, was teleported to Milton Keynes, and fought the Leprechaun and his cronies singlehandedly.

Doc Shocks found out that being the master of electricity doesn't help much with crowd control, but really saved the day when he blasted Monolith out of the beast's belly!

Really, though the RAF deserve most of the credit for bombing the living daylights out of our scaled friend.

Next time: Knocking that little Irish shit into a cocked hat (fingers crossed!)﻿

I love living in the future. Just finished a hangout session with a dear friend I don't see often enough. ﻿

Great Hangout game tonight. Once again our supers (Spectre, Doc Shocks and Monolith) defended London against miscreants. This time it was a whole terraced house full of powered terrorists with a bomb lab in the basement. Of course everything went ka-bloey. Monolith tried using a banister to pole-vault over an unstable floor, and feel like an anvil straight through the building and landed among home-made nitro and bombs.
Doc Shocks got a black eye, Monolith got blown up (being invulnerable has its advantages), and Spectre got a mysterious clue in the shape of a post-it on the back of her hand.
While investigating this clue back at headquarters, the voice of their commanding officer came over the tannoy:

"There's a Godzilla in the Thames Estuary!" 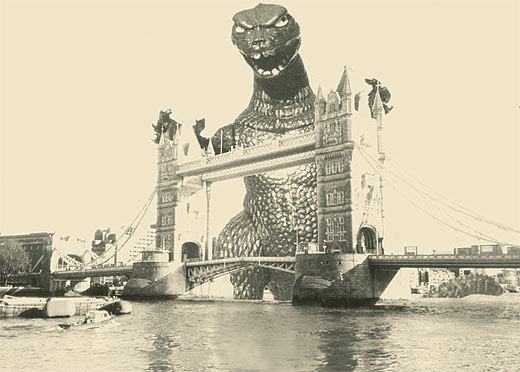 “Asleep, he inhaled the scent of clean laundry, which was the most beautiful odor in the world. Clean laundry smelled like sunshine, fresh air, and good health. This lovely smell contained a hint of the celestial, of the better world that heaven is said to be. It would be presumptuous to speak of angels, but if angels wore robes, those robes would smell like the clean, fluffy socks and underwear surrounding Little Red and his nameless guest.”

We celebrated my dad's birthday today. The brunch buffet is really a challenge to culinary mores and decency. You're faced with possibilities you did not dream of, like "I actually COULD smother my sticky bun in béarnaise sauce, or pour maple syrup on my pommes rösti...". It is a Babylon of food! With empty eyes and scrambled egg-smeared cheeks we realize that this cornucopia is a downward spiral into laissez-faire gluttony and heartburn.

People bring their kids to such a bowling alley brunch buffet. It's full of stuff for them to do, and the hard working staff are prepared for a bit of mess. I like kids, but they often bring out the worst in their parents. One dude told his fussy kid to be a big boy. Listen buddy, between the dungarees, the pacifier and the high chair you put him in, I don't think you're dealing with a big boy yet.

After brunch my dad trounced everyone at bowling.﻿

You know what it's like when a cyclops throws a cocktail party for giants, and the only reason they ignore you is that you're so small? How you stare up into those grotesquely exaggerated faces and shudder?

And you know how you walk down to the swimming pool, and find that it is full of sad children's ghosts, all gauzy and pale? And then do you know how you convince them to form a huge composite ghost, one that rises from the pool and devours the assembled guests?

I don't either, but I sure dreamed about it last night.﻿


This entry was originally posted at http://hafwit.dreamwidth.org/26290.html. Please comment there using OpenID.

The Grey Emperor looms over existence, the specter of despotism and war. He has brought down the Seers of Khaa with schemes as convoluted as any they could ever contrive. They search for hollow knowledge and silent words, their wisdom turning fallow from disuse.